A thrilling gothic horror novel about biracial twin sisters separated at birth, perfect for fans of Lovecraft Country and The Vanishing Half.

As infants, twin sisters Charlie Yates and Magnolia Heathwood were secretly separated after the brutal lynching of their parents, who died for loving across the color line. Now, at the dawn of the Civil Rights Movement, Charlie is a young Black organizer in Harlem, while white-passing Magnolia is the heiress to a cotton plantation in rural Georgia.

Magnolia knows nothing of her racial heritage, but secrets are hard to keep in a town haunted by the ghosts of its slave-holding past. When Magnolia finally learns the truth, her reflection mysteriously disappears from mirrors—the sign of a terrible curse. Meanwhile, in Harlem, Charlie’s beloved grandmother falls ill. Her final wish is to be buried back home in Georgia—and, unbeknownst to Charlie, to see her long-lost granddaughter, Magnolia Heathwood, one last time. So Charlie travels into the Deep South, confronting the land of her worst nightmares—and Jim Crow segregation.

The sisters reunite as teenagers in the deeply haunted town of Eureka, Georgia, where ghosts linger centuries after their time and dangers lurk behind every mirror. They couldn’t be more different, but they will need each other to put the hauntings of the past to rest, to break the mirrors’ deadly curse—and to discover the meaning of sisterhood in a racially divided land.

“Steeped in atmosphere, equal parts ghost and sororal love story, McWilliams has written a pitch-perfect southern gothic thriller about race, family, and what it means to call a place home.”

“A moving story about sisterhood and perseverance in the face of a society that tells Black girls they are worthless.”―Booklist

“MIRROR GIRLS is a spine-tingling, empowering look at justice and civil action that urges readers to be aware, to be true to themselves and to take action. As Magnolia observes, ‘As twin sisters, white and Black, we are a symbol of coming victory. A promise of change.’”―BookPage, starred review

For colored girls, there’s no such thing as happily ever after.

My daughter knew that—it was loving Dean Heathwood that made her forget. That boy was as white as they come, but he sure did love my Marie. He showered her  with gifts: an obsidian mirror, a leather atlas, a diamond ring.

Of all Dean’s fancy presents, though, the books were easily the most dangerous.

Beautiful books they were. Romances and love poems,  sonnets and fairy tales, all leatherbound with bright illustrations. The kind of books colored children never get to touch,  let alone own. Soon enough, my daughter’d fallen in love with those lily- white stories, with the kind of happy endings  she’d never live to see.

Now I carry Marie’s favorite book of all, Love Sonnets,  under one arm, protecting it from the night air. My daughter’s child is strapped to my back. I take the long route  through the swamp, the very path the ancestors traveled,  running from Heathwood Plantation’s shackles. Like them, I  push past creepers and marsh grass, following the thick, slow  pulse of the water. Peat bog sucks at my ankles, but I can’t  afford to fall.

It’s long past sundown. If white folk spot me, they might  arrest me. Or kill me like they did my sweet, lovestruck girl.

I lean against a cypress tree, letting grief well up for one  heartbeat—then, no more.

For my grandbaby’s sake, I’ve got to keep moving. Struggle on.

On my back, Charlene lets out a wrenching wail. Ever  since we left Freedom House, she’s bunched tight with rage,  like she knows she’ll never see her twin sister again. Like she  knows, too, that I’m to blame.

The scent of woodsmoke leads me to the conjure man’s  hut. The grass- roofed shack perches on the water’s edge,  hidden beneath a veil of Spanish moss. Preacher says it’s a  mighty sin to visit with a conjure man, but it’s a risk I have to  take.

The night Marie birthed my grandbabies, I smelled the sizzle of a curse cooking itself up. One twin came into this  world white as goat’s milk; the other, pecan brown. Doctor  called it a miracle, but I wondered. After Marie died—and  poor Dean, too—the hex-stench grew stronger. I got to remembering what my daddy used to say: Only thing stronger than white magic is our magic. Don’t forget: Our love’s stronger even  than their hate. And that got me to thinking of Old Roland,  brewing up potions in the swamps over yonder.

Inside, I catch my breath.

Finally, I do see. He’s the shadow crouched behind a soup  pot, stirring swamp- grass- green liquid with a broom handle.

Careful now, Jeannette. You got to be careful.

My grandbaby grabs a fistful of my hair, holding tight.

“I’m here to buy some of your power, Roland.”

“What you need with my power?”

Grief drags me down. My lower back twitches like it  might give out. I’m old—only forty- five, but all my life lived under Jim Crow, working for white folks from sunup to sun down. I’m too tired to be raising a baby again. I sure don’t  have time for this man’s games.

“My grandbabies are in bad trouble. I’ll pay what you  want, do whatever it takes—”

“I know you’ve been through hell, Jeannie. And you know why, don’t you?”

Something slithers across the wall. A snake. Silently, my  grandbaby points.

Tears roll down my cheeks. “It’s my fault. I broke the bond between twins. Cursed them, though I didn’t mean to.” Old Roland nods. “Spirits say the white woman tricked the child outta you.”

“Yes.” My voice breaks, thinking of the baby that I’ll never hold again: the sin that’ll never wash clean. “The Heathwood woman came to me weeping. Made me think she cared—that she longed, as I did, for all that’s left of our children. But her heart is ice. She’s never loved. Not once in her life.”

“Did her boy love your daughter? Love her true?”

In answer, I hand Roland the book of sonnets, marked at Marie’s favorite page. Even now she’s gone, I can still  hear her chanting her favorite verse, just like she did all  through her pregnancy: I love thee with the breath, smiles, tears, of  all my life. . .

While Roland reads—smoky, shape- shifting spirits peering over his shoulder to spy the pretty picture—my mind  slips over a past slick as ice, remembering:

Dean and my daughter gazing down at their mixed-blood twins, the dark twin holding on to the light one like she was afraid of leaving her behind.

Marie in her wedding dress, waving goodbye to me on her way up North to be married.

The wicked shine of Marie’s casket as gravediggers lowered it into the  ground.

“Cursed, oh, yes, they are!” Before I can stop him, Old Roland chucks the book into the pot.

I leap up, hands trembling. It’s too late; Dean’s beautiful  book is melting.

“Dean Heathwood gave that book to my daughter with a pure heart!”

“Dean forgot how much this world hates love between Black and white. Those young folks never should’ve met, Jeannette. Should’ve kept an ocean between them.”

Roland’s eyes gleam. “Question is, what we gonna do now? And what are you willing to pay?”

I’ve got five hundred dollars in my pocket, thanks to the Heathwood woman. But Old Roland doesn’t deal in money.

“I’ve got two questions that need answering.” I grip Charlene’s hand, more to calm myself than her. “I’ll pay whatever  you want.”

Quick as a “ash, Old Roland snatches the snake off the wall. He holds it before him, letting it writhe.

I suck my teeth. “Take three.”

Roland’s eyebrows disappear into his hair. “Well, that’s new. No one ever wants to pay me extra! You got a death wish or what?”

I speak through clenched teeth. “The third year’s for Magnolia. The light- skinned child the Heathwood woman took. If she ever needs anything. If she ever visits you . . .”

Roland cocks his head. Again, I see the spirits swirling, whispering about me and the baby on my back.

God may smite me for coming here, but what choice did I have? When all else fails, our people look to the old ways.  Roland lives on swampland, but he’s as much a part of Colored Town as the soil, the cotton fields, even the star- studded  river itself.

In one smooth motion, Roland pulls the machete from behind his back and slits the snake from head to tail. The  dying thing thrashes, blood foaming. Chanting, Roland dips his finger into the snake’s open belly. He marks my forehead  with gore—then kisses me full on the lips.

I gasp, feeling years leave my body. Pulled from my lungs like air. Released, I double over, battling for breath.

“Come back in the morning. I’ll forge you a silver cane outta this snake’s soul. Make him a cobra, like his proud African ancestors! You ask your questions, then catch your train.  I know you’re not planning on staying, after what happened  to your girl.”

My lips feel bruised. “No. I’m not staying.”

Roland stirs the green waters, concentrating. The spirits ring an ever-tighter circle around his head, soaking up the fumes.

I want to say goodbye to Roland—goodbye to all Georgia, and the only world I’ve ever known. But grief clogs my  throat, silencing me.

Gutted, I stumble into the dark.

It’s an effort to put one foot in front of the other. For Charlene’s sake, I walk.

I won’t make the same mistake with Charlene that I did  with Marie. Letting her head be filled with nonsense and  dreams.

“Remember now, Charlene Yates. For colored girls, there’s no such thing as happily ever after. No use chasing it. You’ve got to fight to survive, but don’t hope for too much.”

The next night, the two of us board the train, headed for New York, a new life. I step carefully—a cobra’s silver head nestled inside my palm.

It’s a long journey for a middle- aged woman and a baby.

I don’t sleep. Every time I start to nod off, a sound wakes me. 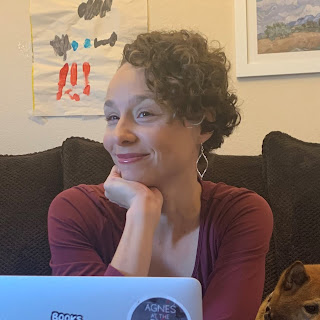 Kelly McWilliams is a mixed-race writer. She is the author of Doormat and Agnes at the End of the World. She lives in Seattle with her family.

3 winners
will receive a finished copy of MIRROR GIRLS, US Only.

One thought on “YA Spotlight & Excerpt: Mirror Girls by Kelly McWilliams…plus a giveaway!”