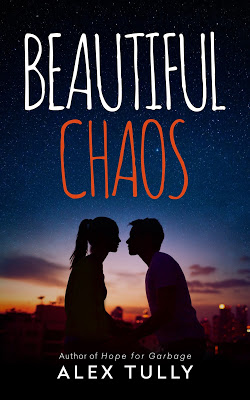 While most seventeen year-olds work part-time delivering pizzas or whipping up frappuccinos, Brady O’Connell’s job is a little less conventional. Helping his dad with the family ‘business’ is a responsibility he doesn’t take lightly, especially when thousands of dollars are being exchanged. There are rules to be followed, timetables to be kept. But when his best friend Jay gets backstage concert tickets, and business interferes with a once-in-a-lifetime opportunity to meet their favorite band, Brady decides to break the rules, just one time.And one time is all it takes to send his life spinning out of control. When an envelope full of cash ends up in the wrong hands—specifically in the hands of a pretty red-head named Vivienne—things get messy in a hurry. Where Vivienne goes, a whole lot of chaos seems to follow.But sometimes…chaos is a beautiful thing.From the author of Hope for Garbage comes another fast-moving, emotionally-charged tale, full of plot twists that will keep you guessing, and true-to-life characters you will root for. Most of all, this is a story of first love—crazy, chaotic first love—love that hits us hard, and never lets go.

About the Author
Alex Tully lives outside Cleveland with her husband, two teenagers, and a golden retriever named Trooper.When she’s not writing or doing mom stuff, she loves to read (actually Audible) and Netflix (or Amazon Prime) binge. She is also a huge Cleveland Browns fan – laugh if you must 🙂Her debut novel, “Hope for Garbage”, a contemporary coming-of-age story, was released in 2014 and her latest novel “Beautiful Chaos” was released in June 2016.She is hard at work on her third novel.
Author Links:

Excerpt:
Brady was already two steps ahead of her, walking toward Kendra’s car. Vivienne suddenly contemplated what she was doing. For some reason, even though she barely knew him, she completely trusted Brady. But she also realized that was stupid. Most psychos came off as perfectly nice people. Any girl with half a brain in her head—and she’d like to think she had more than just a half—would take some precautions.

When they got to the car, she threw him the keys and opened the rear door.

“What are you doing?” he asked.

“Sitting in the backseat.”

“Oh, and I always carry pepper spray with me, just so you know.” She jumped into the backseat and shut the door.

He stood outside the car for a couple seconds before he opened the door and got into the driver’s seat. “Unbelievable,” he said under his breath.

“I’m sorry, but think about this: what if you had a daughter? What would you want her to do? That’s what my mom asked me once, and she makes a really good point.”

Brady shook his head. “I’m not sure how to even begin to respond to that.” He turned around and looked at her. “But I can assure you, the last thing on my mind is trying to make a move on you. I just want my money back. And once I get that, you will never see me again.”

“Fine.” But she felt a pang of disappointment. She wasn’t sure why, but she did.