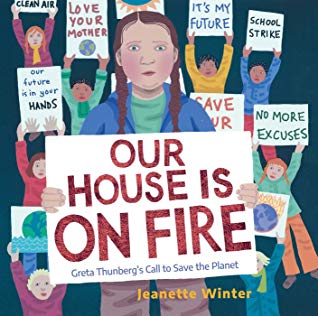 From acclaimed picture book creator Jeanette Winter comes the urgent and powerful story of Greta Thunberg, the sixteen-year-old climate activist who has sparked a worldwide student movement and is demanding action from world leaders who refuse to address climate change.

When she was fifteen years old, Greta Thunberg’s teacher explained to her class that our climate is changing—the earth is getting warmer, the polar ice caps are melting, and life on earth is threatened. Greta was devastated. What could she do? If the grown-ups weren’t doing enough to save the planet, Greta would have to demand change herself.

So she went on strike, skipping school every Friday to sit outside of the Swedish Parliament building with a sign that read “School Strike for Climate.” At first, Greta was the only one. But gradually, more and more students joined her, until her lone protest had sparked a worldwide student movement for action on climate change.

Now, a year later, Greta is speaking to audiences of world leaders at important meetings like the United Nations Climate Conference and the World Economic Forum. She is leading the conversation on climate change and sparking worldwide conversation on how to save our planet. Greta is showing everyone that even the smallest person can make a big difference, and this picture book informs and inspires young readers who are beginning to learn about the world around them.

About the author: Jeanette Winter is a celebrated picture book creator whose acclaimed works include Diego; Oil; and The Secret Project, all written by Jonah Winter, and her own Sisters: Venus & Serena Williams; The World Is Not a Rectangle: A Portrait of Architect Zaha Hadid; Nanuk the Ice Bear; Malala, a Brave Girl from Pakistan/Iqbal, a Brave Boy from Pakistan: Two Stories of Bravery; Henri’s Scissors; Biblioburro: A True Story from Colombia; Nasreen’s Secret School: A True Story from Afghanistan; and The Librarian of Basra: A True Story from Iraq.