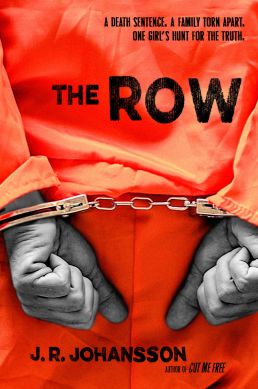 Summary from Goodreads:
A death sentence. A family torn apart. One girl’s hunt for the truth.  Seventeen-year-old Riley Beckett is no stranger to prison. Her father is a convicted serial killer on death row who has always maintained that he was falsely accused. Riley has never missed a single visit with her father. She wholeheartedly believes that he is innocent.  Then, a month before the execution date, Riley’s world is rocked when, in an attempt to help her move on, her father secretly confesses to her that he actually did carry out the murders. He takes it back almost immediately, but she cannot forget what he’s told her. Determined to uncover the truth for her own sake, she discovers something that will forever change everything she’s believed about the family she loves.

INTERVIEW WITH RILEY (Main Character of The Row)

What is it like being the daughter of East End Killer?
I wouldn’t know. They have the wrong man and I really wish the police would step up and find the real killer so my father could come home.

You’ve been present for many of his court appearances. What makes you and your mother want to stick by him through all of this?
Simple loyalty? What makes anyone stick by their family members when they’re in trouble? What kind of people wouldn’t do that? In spite of what everyone thinks of him, my father is a very good man. If you could see him with us, you would know that. He loves us and all we want is to be back together again.

But he’s been locked up for twelve years. How can you really know him?
And I’ve visited him for at least an hour almost every week of that time. Do you really think I wouldn’t know when spending that much time just talking to him? We have a real relationship. We love each other. He taught me to play chess. I know him.

Do you feel like you’re a normal teenager?
Define “normal teenager.”
Did he teach you how to be a lawyer as well?
He taught me how to defend myself. Spending so much of my life in a courtroom taught me about being a lawyer.

About the Author
J.R.  Johansson’s books have been published in a dozen languages and more than twenty countries worldwide. She has a B.S. degree in public relations and a background in marketing. She credits her abnormal psychology minor with inspiring many of her characters. She lives in Utah with two sons, a wonderful husband, three cats, and a hot tub named Valentino.
She is represented by the stellar  Kathleen Rushall of Andrea Brown Literary Agency.

One thought on “YA Spotlight with Character Interview: The Row by J.R. Johansson (Plus a Giveaway!)”