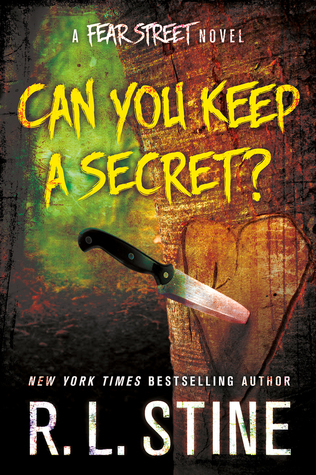 The undisputed king of scaring children and killing teenagers is back in the fourth chilling installment of his Fear Street series, which has relaunched to the delight of horror junkies everywhere. R.L. Stine is at his best in CAN YOU KEEP A SECRET? (St. Martin’s Griffin; on sale April 12, 2016) another spine-tingling tale about temptation, betrayal, and fear.

Eddie and Emmy are high school sweethearts from the wrong side of the tracks. Looking for an escape from their dreary lives, they embark on an overnight camping trip in the Fear Street Woods with four friends. As Eddie is carving a heart into a tree, he and Emmy discover a bag hidden in the trunk. A bag filled with hundred-dollar bills. Thousands of them. Should they take it? Should they leave the money there? The six teens agree to leave the bag where it is until it’s safe to use it. But when tragedy strikes Emmy’s family, the temptation to skim some money off of the top becomes impossible to fight. There’s only one problem. When Emmy returns to the woods, the bag of money is gone, and with it, the trust of six friends with a big secret.

Packed with tension and sure to illicit shivers in its readers, CAN YOU KEEP A SECRET? is another terrifying tale from a master of horror.

About the Author: R.L. Stine is one of the bestselling children’s authors in history, with more than 400 million books sold to date. In 1986, he wrote his first teen horror novel, Blind Date, which became an instant bestseller. In 1989, Stine created the Fear Street series, one of the bestselling young adult book series in history, with 80 million copies sold worldwide. He is also the author of the bestselling children’s series Goosebumps, which began in 1992 and has sold 300 million copies around the world, in addition to becoming a television show and a feature film in 2015.

Praise for CAN YOU KEEP A SECRET?

“There are jump scares galore, secret identities, and Stine’s patented final line. Stine goes straight for the nose in this one: the sour, putrid odors of decay in the cemetery and elsewhere lend a marvelous creepy flavor in which horror fans will delight.” – Booklist