Hi Jenny! On your website you talk about writing after your kids go to bed and getting in at least 500 words per day. You also make a very impressive admission — you’ve written four novels! Two remain in the theoretical drawer, one is currently on submission, and SAVE ME, KURT COBAIN is your debut. Let me repeat myself — that is impressive! I admire your positive spin on rejections and continuing to write. You note how new characters keep you motivated and help you move on to different projects. I’m sure you have days when the words just won’t flow. What do you do to help yourself move past those moments when your creativity stalls?

My strategy is really two-fold, I guess. I carry a notebook (a pink Moleskine, to be precise) to jot down observations (what a teen girl on the bus is wearing, a turn of phrase). I also try to sit at the computer and log some words even when the writing goddesses have snakes for hair. I tell myself the words don’t have to be keepers. I feel the main thing is to stay in touch with your creative spark despite all the stresses of work, and laundry, and commitments. Keep that fire door open.

Years ago, on a trip to Seattle, I saw Kurt’s house (from the outside) — I was and still am a Nirvana fan after all. His talent made him larger than life and I can easily see why you’d be drawn into writing about him in the present tense. The “what if” is such a tempting question. How did you decide to center your story around a teen protagonist? When you began, did you know you were aiming for the YA audience?

The events in Save Me, Kurt Cobain are actually designed to be technically possible, as strange as that may sound. The key true event was a March 1991 Nirvana show in Victoria, British Columbia. It was a few months before the band went galactic with Nevermind—yet almost no one attended this show. So I started wondering, who was there? What happened? I set upon the date for the book based on this concert—so Cobain’s “daughter” would have to be a teen. I also believed the main character would need to be a young teen to hold that kind of fervent, crazy idea. That what young teens do.

I originally imagined this story to be a “crossover,” appealing to both adults and young adults. I still hope this is true, though most definitely the story is trained on Nico, the 15-year-old main character. There is a very strong non-fiction element to the book, though, including many facts about Kurt Cobain’s life. I hope that will appeal to adult fans as well.

Are you secretly hoping for Frances Bean (or Courtney Love) to “like” the book?

Oh, I could not guess how they would respond to this book. Every single day, there are still more news stories or creative projects from around the world centering on Kurt Cobain. I was very aware in writing this that Kurt Cobain left a family behind, and I hope my story is respectful to his legacy. I guess I would hope that Frances Bean might understand the spirit of the book. Nico is a visual artist, as is Frances Bean. The novel is a lot about music and art as a way to heal from your pain and find your path, and I hope she might relate to that.

Your agent, Kerry Sparks, is based in New York City. Have you made a trip out to see her yet? What are your impressions of NYC? (Perhaps you’ve even been here before.) From your website, it sounds like your someone that enjoys both the natural world and all of the things a busy city has to offer. What’s your perfect balance?

Yes, my fabulous agent is based in New York, as is my wonderful editor at Random House Children’s, Wendy Loggia. I did go to meet them both, and had a blast. I had visited New York before, but meeting those two made it a special trip. It was a thrill to visit the Random House office and see an original copy of In Cold Blood. I am not a huge shopper, but I love going to plays. My husband and I went on a theater bender. I think we saw five plays in four days. We left the kids at home, for once, and the only time I felt truly guilty was when I saw a truck at Central Park that just sold cupcakes. 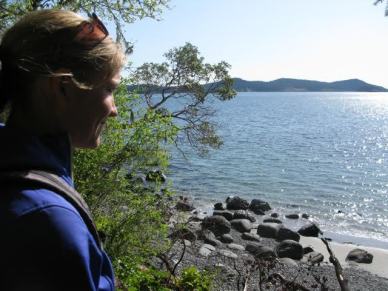 I do really love being outside in nature, though. I live in a spectacularly beautiful part of the world where I can see hummingbirds, otters, and bald eagles on my morning run—and maybe even a whale. Ideal world? I live on British Columbia’s coast for my daily dose of oceans and mountains—and win the lottery so I can travel for my fill of theater and galleries in New York. Also, jet lag is abolished.

Being in the debut stage sounds so exciting. I love how you talk about the experience of having bookmarks designed. Have you scheduled any book signings yet? Will you be traveling to promote the book? Does this idea leave you excited or exhausted? (It must be hard to juggle with two young children.)
Yes, being a debut is exciting—and stressful, too. I have signed a few books, but haven’t yet set up any signings. I have been so busy! I am going to go to few writers’ conferences both in Canada the U.S., and I am eager to connect with other writers. I would like to travel to promote the book at least within my corner of the world—maybe Vancouver, Seattle, Portland—to do some readings. I’ll see! The idea is both exciting and exhausting. You are correct that it is hard to juggle these plans with children. In fact, they have a lot going on their own lives. They are even writing their own books.

THANK YOU so much for chatting with me! Best of luck with your debut!

For more info about Jenny Manzer, visit her website: www.jennymanzer.com